This challenge revolves around a custom N64 game created for NSec, and is of course mushroom themed.

The challenge instructions provide a few files, including Project64.exe, a Nintendo 64 Emulator. Before we start a deep dive into the game file (legend_of_shiitakoin.n64), let’s try to load the game and make sure everything works correctly. 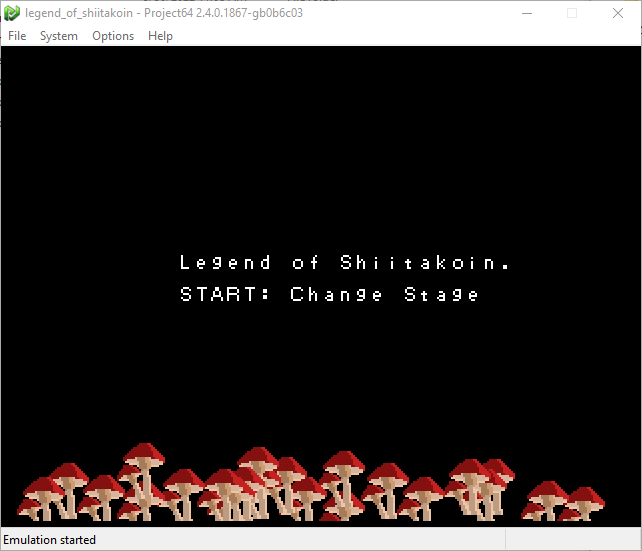 By exploring the options, I found the key mapping from keyboard to an N64 controller, so I would know how to control my potential character or otherwise play the game. 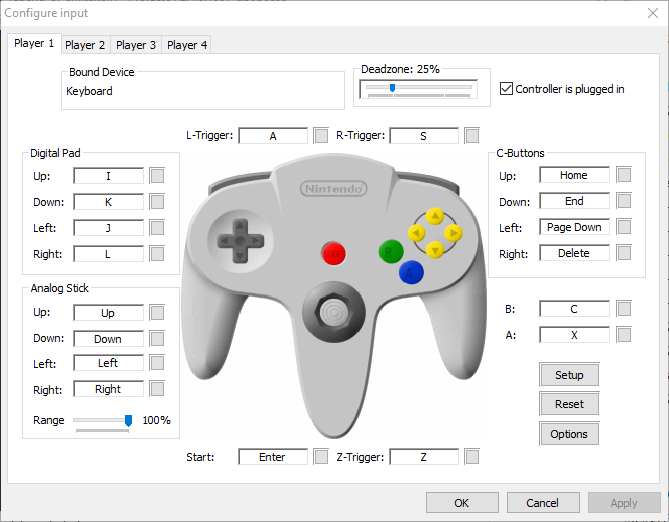 By pressing start (enter), I could cycle between the loading screen and two stages.

The first stage accepts 4 hexadecimal numbers as input. I tried a few obvious options like 0xDEADBEEF, and the game would print INCORRECT overlayed with the inputs. 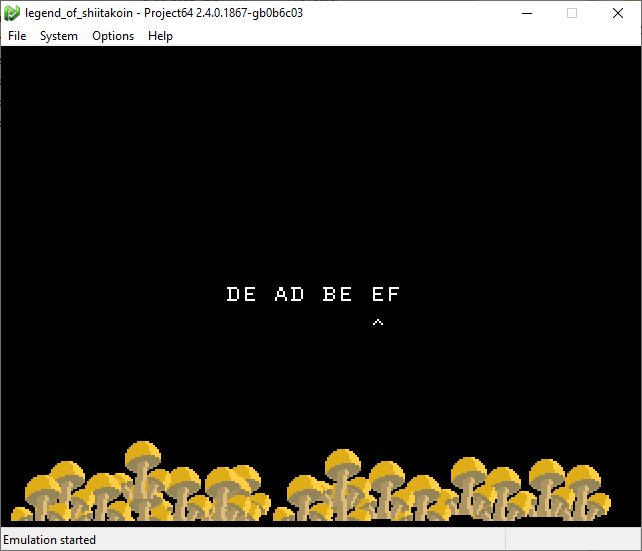 Presumably, if we enter the right inputs, this will print a flag to the screen instead of INCORRECT.

Similarly, the second stage had a little mushroom you could move around which would update x,y coordinates on the screen. The goal, I guess, is to input at certain coordinates to print the flag to the screen. 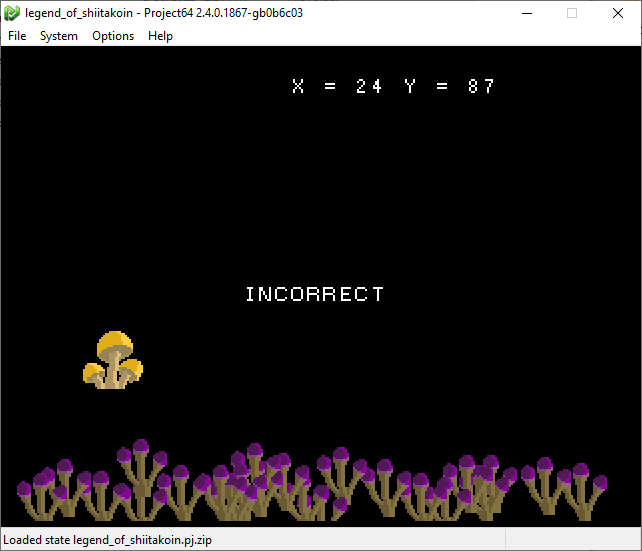 I had a few ideas as to how I might approach this challenge. The simplest approach would be to try to brute force the game, but 0xFFFFFFFF is a really big number and would take a very long time to solve. I only just regained access to power on Sunday midday of the event, meaning I only had a 3 hours before the CTF finished, and this approach wasn’t an option.

My next thought was that maybe I could attach a debugger and try to skip the instructions checking that the inputs were correct, or just force it to accept whatever input, and maybe the flag would be displayed to the screen.

With a bit of googling, I realized Project64 has a debugger that I could work with, so started here. 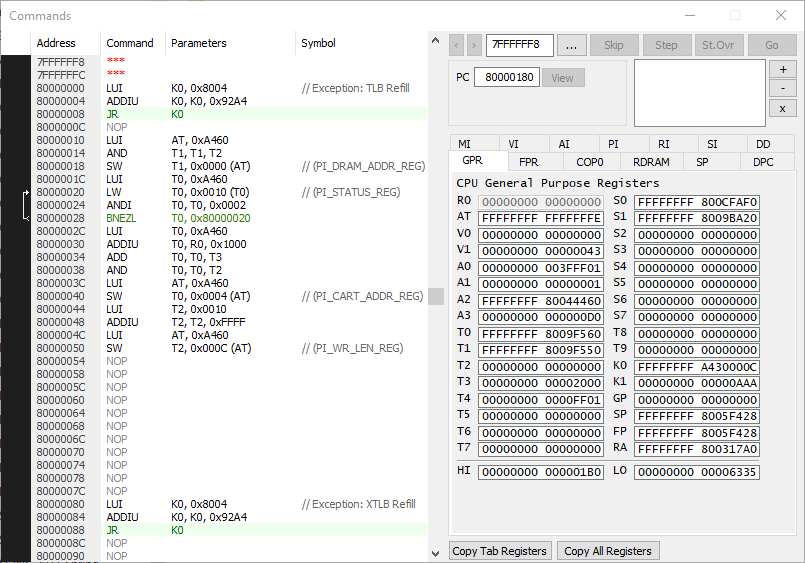 It was pretty straight forward to setup, but I had a problem. I still needed to figure out where to set breakpoints and where the interesting code was.

I like to use Ghidra for this sort of thing, though it doesn’t know how to interpret .n64 file types by default. It didn’t take long to find zeroKila’s loader module, though. After following the instructions to add his loader as an extension to Ghidra, opening legend_of_shiitakoin.n64, and analyzing the file with the default settings, I could start to explore the code. 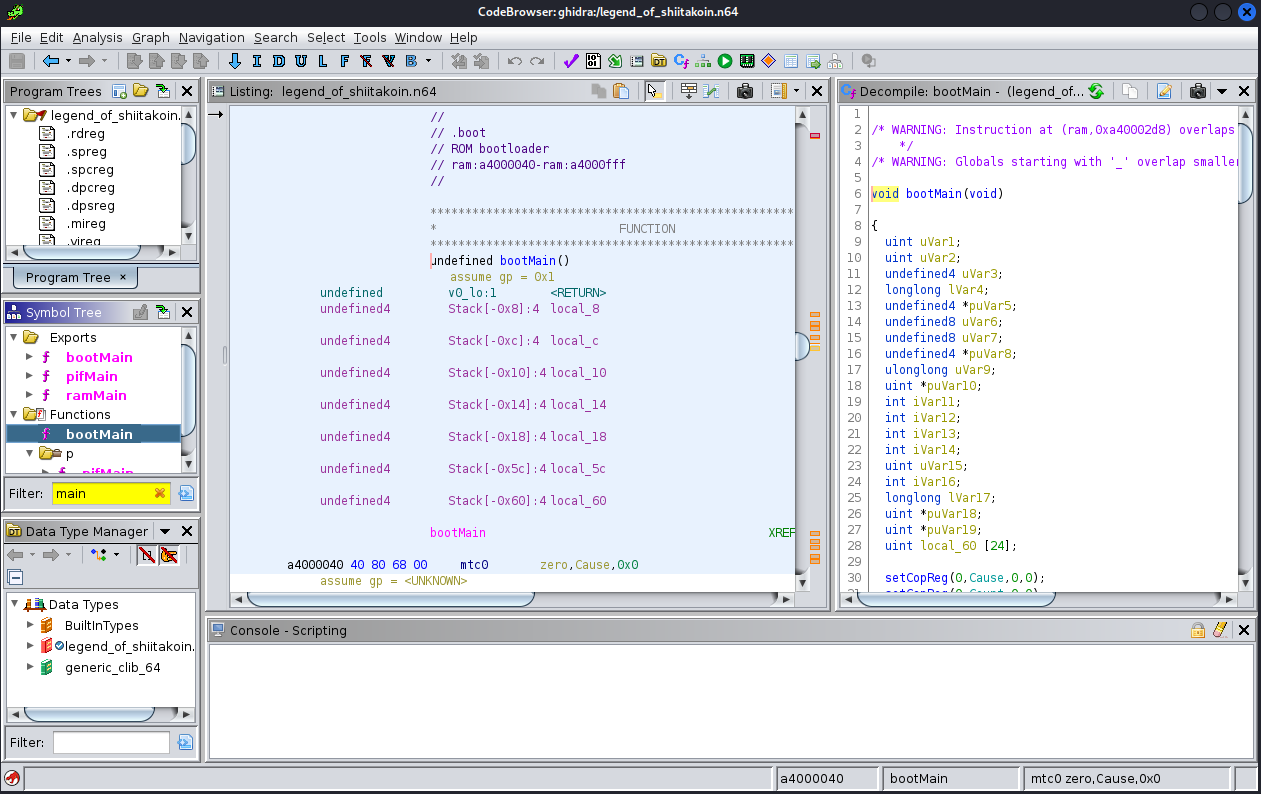 My current plan is still just to skip the input validation and hopefully print the flag, so I need to find where that print occurs. I started by searching for strings in the file… 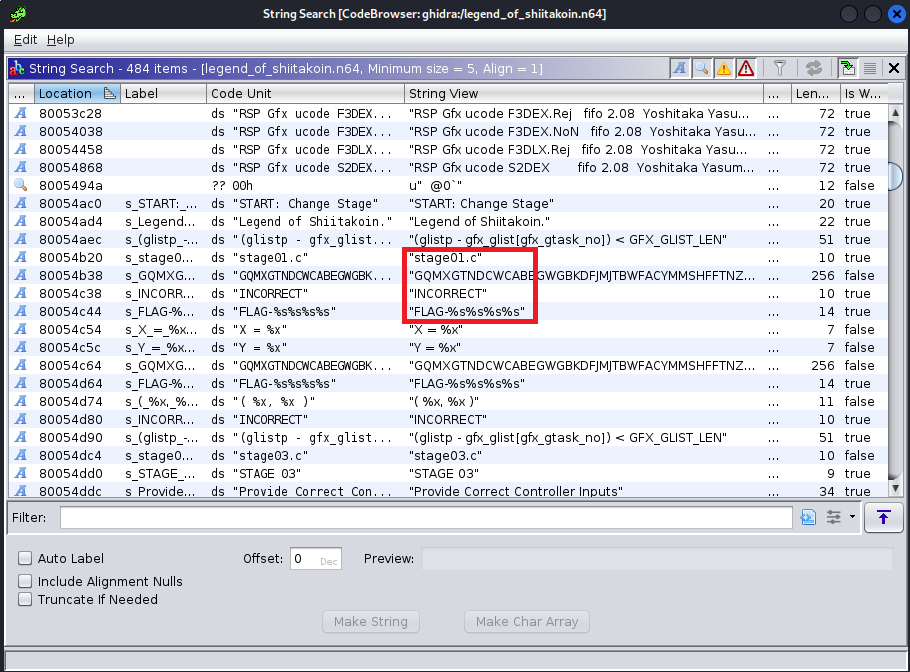 By following the xref to the “FLAG-%s%s%s%s” string, I landed on a function at 0x800276d0. Let’s use that as the breakpoint in the Project64 Debugger and explore from there.

After stepping over a few functions and watching the game, I determined that the function call at 0x80027714 was checking the inputs, and based on the return value will either print INCOMPLETE or continue to new code. Examining the disassembled code at this location confirms this.

All I had to do was replace the V0 register that stores the returned value from the function call with a 1, and the Branch if Equal (BEQ) should trigger, shown in the debugger: 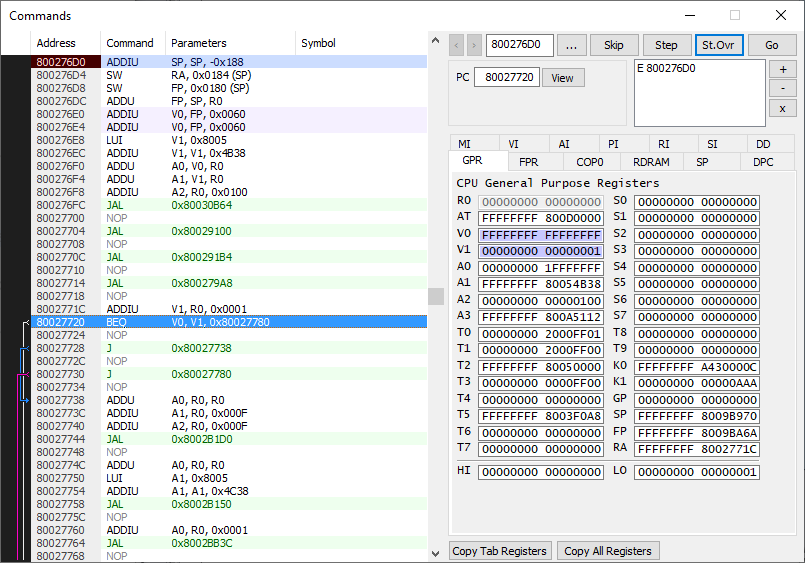 Success, I printed a flag! 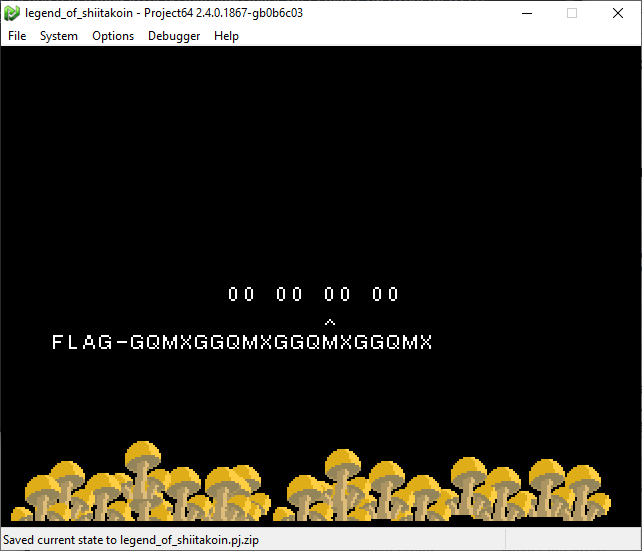 The way they wanted you to do it

It’s not the right flag, though. In fact, a bit more examination shows that the flag is built programatically from the string “GQMXGTNDCWCA…”, shown in one of the previous images. The string is 255 characters long, and each input from this stage will grab the n-th chunk of 5 characters from that string and concatenate them as the flag. This is obvious in the previous image when 0x00 is used as all 4 inputs… the flag is simply “GQMXG” repeated 4 times (minus 1 character for the last input).

So what does this mean? Well, it means we’ll have to input the proper values after all.

If we examine the function that is supposed to return a value of 1, we find the following code:

If we examine the 4 bytes starting at memory address 0x800570e0 which correspond to the 4 main variables used in this function, it’s obvious that they are our 4 inputs. 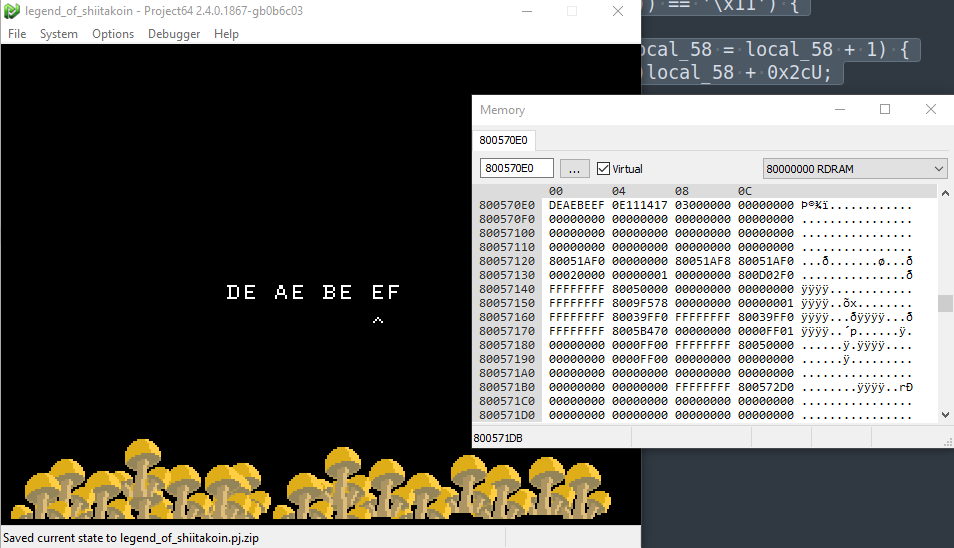 All we have to do is choose data that passes all these if statements such that the code reaches the line to set uVar1 = 1. In fact, most of the checks make that exceedingly simple:

Inputting the determined values into the game… 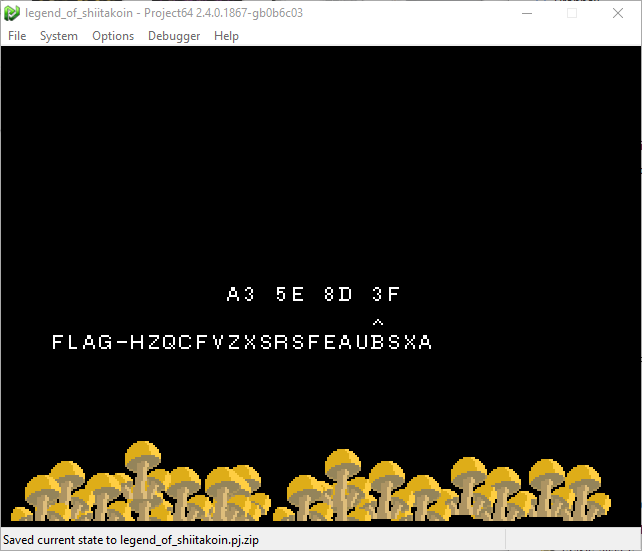 …and we get our flag! For a solid 4 points: FLAG-HZQCFVZXSRSFEAUBSXA.

At this point, there were 45 minutes left until the end of the competition. I wasn’t hopeful that I could finish this next flag in time, but doggonnit I was ganna try!

Similar to before, I found the next time the string “FLAG-%s%s%s%s” was printed, which was shortly before the string “stage03.c”. Apparently there is no stage02. Whatever.

Following the xref back to a function at 0x80028410, I stepped through with the debugger by setting some strategic breakpoints until I eventually found a function call at 0x80028b84 that seemed to serve the same purpose as with the previous flag - if it returns 1, then instead of printing INCOMPLETE to the screen, some new code can be reached.

This code is a bit more complicated then the previous flag’s, but still not too bad. It seems to be using bitwise operators to check that the 2 inputs pass various checks. Let’s clear up the code a little bit by replacing 0xffffffffffffffff with -1 and some better variables names.

Some of the if statements, when true, will result in a returnVar that we don’t want, others are branches we do want to take.

Taking the bits from the last columns as hex, the two input values x and y should be 0xa3 and 0x4e. 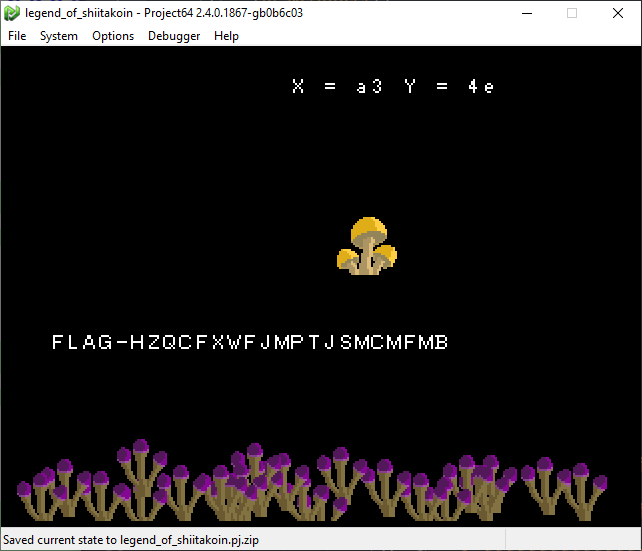 With 3 minutes to spare before the end of the CTF, our final flag for 4 points:
FLAG-HZQCFXWFJMPTJSMCMFMB.